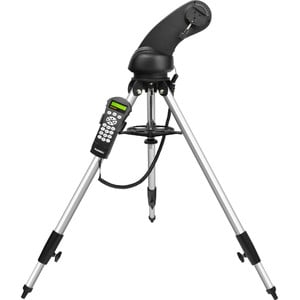 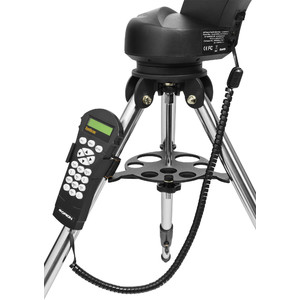 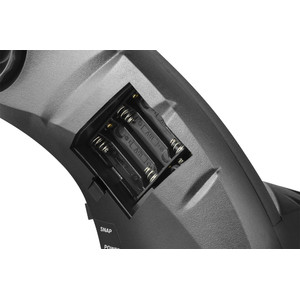 The StarSeeker IV mount - as indicated by the version number, this is a further development of this tried-and-tested single-arm mount. Your telescope can be straightforwardly attached via the prism rail (Vixen-Style) and secured using a single lock-screw. Observing can start immediately after running through a short procedure where the computer learns how the mount is oriented with respect to the night sky ('2 Star Alignment'). Then simply select any object you would like to observe from among the huge database available in the hand control box. The telescope will then slew to this object and hold it centred in the eyepiece. The object would constantly move out of the field of view, due to the rotation of the Earth, without this motorized tracking - but not with the StarSeeker IV mount!

But best of all is that the mount is equipped with encoders on both axes! This means that, even after the computer has been set up, you can move where the telescope points to manually without the computer losing its orientation. This is particularly useful if you want to manually point the telescope at a completely different part of the night sky - this is silent and saves on battery life. Simply move the telescope by hand to roughly the correct part of the night sky and then let the GoTo computer find the exact position.

Thanks to the mount's design, you have full freedom of movement - 360° in horizontal rotation and 90° in height (zenith), without the optics fouling the mount! The StarSeeker version IV comes with a sturdy steel tube tripod. This is a real advantage as compared to the aluminium tripod provided with this mount's predecessor.

This single-arm mount is suitable for smaller OTAs weighing up to 6kg. It is very portable, quick to set up and easy to operate. It is hence ideal for casual observers who do not want to spend a lot of time organizing and assembling their equipment.

The motorized tracking also makes this mount a good platform for astrophotography of bright astronomical objects - especially the Moon and planets.

The StarSeeker IV mount is available in combination with different optics or on its own. The latter case is of interest if you already possess a small telescope with which you have been tracking by hand and now wish to retrofit with a motorized mount. When supplied in its own, it comes with an L-rail with a camera thread, and a trigger cable for Canon cameras. This lets you simply mount a camera instead of a telescope.