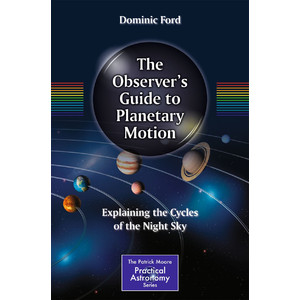 Explaining the Cycles of the Night Sky

To the naked eye, the most evident defining feature of the planets is their motion across the night sky. It was this motion that allowed ancient civilizations to single them out as different from fixed stars. But how does the geometry of the Solar System give rise to the observed motions of the planets and their moons?

Although the motions of the planets may be described as simple elliptical orbits around the Sun, they must be observed from a particular vantage point - the Earth, which spins daily on its axis and circles around the Sun each year, resulting in more complicated patterns. The Observer’s Guide to Planetary Motion provides accurate tables of the best time for observing each planet, together with other notable events in their orbits, helping amateur astronomers plan when and what to observe.

Along the way, many questions are answered: Why does Mars take over two years between apparitions (the times when it is visible from Earth) in the night sky, while Uranus and Neptune take almost exactly a year? Why do planets appear higher in the night sky when they’re visible in the winter months? Why do Saturn’s rings appear to open and close every 15 years? This book places seemingly disparate astronomical events into an understandable three-dimensional structure.

The author Dr. Dominic Ford is an experienced observer of the night sky and a regular contributor to the Journal of the British Astronomical Association.